One of the foundational claims of my research is that, as with many phenomena, the way in which one approaches rhythm will impact how one thinks about it. Pascal Michon, probably the most explicit philosopher of rhythm, thinks about this in terms of the two different definitions of rhythm identified by linguist Benveniste in 1966. Benveniste argues that the Platonic definition of rhythm is the default one for which we all reach – an oscillation between strong and weak beats, an order of a sequence of time, associated with concepts like meter, number and periodicity – but that it is not oldest. The older, pre-Socratic, ionian version of rhythm, Rhuthmos, denotes an ephemeral shape or improvisation. Michon takes this schema and traces a battle between these two versions of rhythm that plays itself out over the history of philosophy. One feature of his narrative is that the scientific disciplines tend to gravitate towards the Platonic understanding while the poets attempt to recover something of the pre-Socratic. Philosophers are split down the middle. You can read the whole of Michon’s history of the concept for free here.

Michon points out that the first wave of discussion about rhythm, between the pre-Socratics and the Platonists is a contrast between an empirical and an idealist approach, respectively. The pre-Socratic definition of rhythm is empirical, based only on what they see, and so they describe it in terms of shape. The Platonists think about rhythm in terms of an ideal Form and therefore associate it with a mathematics, an abstract system of numbers. We see this not only in Plato, but also in Augustine for whom rhythm is a question of counting feet, and finally in Boethius who, Michon argues, is largely responsible for quelling the study of rhythm for centuries by reducing it almost entirely to mathematics.

The strange thing that Michon does not seem to notice is that once we get to the eighteenth and nineteenth centuries, when the study of rhythm is revived, it is the empiricists who end up with a Platonic definition of rhythm. It comes up in the idealists as well (e.g. Hegel) but the division is no longer drawn along empiricist-idealist lines. Instead, it is drawn along poet-scientist lines with philosophers caught in the middle. In antiquity, it was thinkers like Augustine who, precisely in the context of discussing poetic theory, espoused the platonic definition. In the nineteenth century the poets are reacting against the platonic definition. So something beyond a simple science-poetry or empiricist-idealist division is going on.

Ludwig’s kymograph. One limb of the manometer is connected to a stylus which writes on the kymograph.

An interesting clue lies in the shift from thinking rhythm primarily under the science of abstract mathematics to approaching it from out of the life sciences. In particular, the nineteenth century saw a proliferation of graphing machines, many of which were applied to rhythm. Ethnographer Haun Saussy says that “Graphic methods were the Big Data of their time.” (Saussy, The Ethnography of Rhythm: Orality and its Technologies, 93). The general category of machine for visually representing rhythms is known as a kymograph (wave writer). The first instantiation was Carl Ludwig’s 1846 kymograph, which measured variation in blood pressure. However, variations eventually came to measure a large range of bodily phenomena including speech (Scott’s 1857 phonautograph), muscle twitches (Helmholz’ 1850 myograph), pulse (Marey’s sphygmograph), as well as other phenomena like atmospheric pressure, tuning fork vibrations, the functioning of steam engines, animal habits and the movement of molecules in cells (and of course we still use the seismograph to measure tectonic activity). Many of these physiological measurements were then combined into what we know as the polygraph. 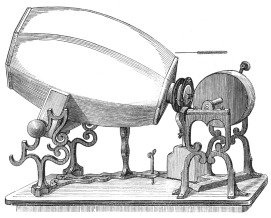 My favourite of these machines is the phonautograph, itself largely useless, though an important advance in a longer technological trajectory. Rather than record the content or meaning of speech (as in stenography), the phonautograph recorded the voice as a trace on paper but could not play it back; it mapped the sound of speech, the phenomenon of speech itself rather than its content. It is a writing not based on an alphabet. But it is also a writing that cannot be read, only analyzed as a correlation of events in time.

These devices essentially spatialize time so that the relationship between events can be precisely measured. In Saussy’s words, the phonautograph is “a translation of sound into a visual analogue, reducing the three-dimensional orientation space of listening to the single dimension of graphic time.” (91). It makes sense, given this methodology, that rhythm would be understood as something measurable and standardized. After all, the various rhythms of nature – speech, pulse, breath – can be literally and precisely transcribed, represented, and therefore subjected to measurement and prediction. If rhythm is known it is known-as-measurable. This is about as empirical as you can get. Scientists are here analyzing actual, particular rhythms in the world. Yet they bring the assumption and/or come to the conclusion that rhythm is standardized and measurable while the ancient empiricists, if we believe Michon and Benveniste, did not.

It therefore seems to me that the difference in understandings of rhythm has less to do with an idealist-empiricist distinction and more to do with the degree to which a phenomenological relationship to rhythm is preserved in one’s observations. In other words, when taken out of the context of its occurrence, with that context including the observer’s own experience of the rhythm, the phenomenon becomes measurable and standardized. Such abstraction might involve the annexing of rhythm to meter through number in the measuring of linguistic feet. This idealizes rhythm by thinking about in terms of perfect proportions rather than engaging any particular rhythm directly. But abstraction could also involve the transcription of a particular, empirical rhythm into a situation in which one is not engaging the rhythm here and now as it is occurring in time, but as a map of an event that occurred previously and, since it is now complete, is available for analysis.

Phenomenological methods, in contrast, attempt to think about rhythm as I am experiencing it. They assume that to try to abstract rhythm from experience will always lead to an impoverished version. Rather than thinking that human experience gets in the way of the phenomenon and ought therefore to be removed from the analysis, a phenomenological approach considers this assumption problematic because it in fact removes the phenomenon from reality, from the way in which it actually occurs and is encountered in the world. We never encounter rhythm (as with a whole host of things) independently of experience and all of the other things that are involved in that experience, so trying to analyze rhythm abstracted from this context will not give us a very meaningful picture.

I do not mean to suggest that science always incurs a synchronic vision of rhyhthm. More phenomenological approaches are not closed to science. In fact, several, particularly at the intersection of linguistics and psychology, have developed methods for attempting to approach rhythms in the context of experience. Peter Auer and Elizabeth Couper-Kuhlen (Language in Time, 1999) have measured the rhythms of language in a variety of contexts and a variety of languages. Reuven Tsur (Toward a Theory of Cognitive Poetics, 1998; What is Cognitive Poetics? 1983) has pioneered the field of cognitive linguistics, which seeks to understand how the brain responds to poetic rhythms in ways that are different from its engagement with other forms of speech.

The empiricist-idealist distinction therefore isn’t enough. Another distinction is also at work. I have named it the synchronic-diachronic distinction, but refers essentially to the degree to which an approach is phenomenological by assessing the degree to which it includes the human experience of time as part of its approach to and definition of rhythm. Transecting Michon’s and Benveniste’s schema with this approach helps to nuance the picture of the study of rhythm somewhat. For example, it explains why, despite the difference between Platonic and pre-Socratic definitions of rhythm, nineteenth and twentieth century attempts to re-introduce the pre-Socratic definition (Nietzsche, Bergson, Deleuze) repeat some of the problems of the Platonic approach that the pre-Socratics (on Benveniste’s reading) managed to avoid.