Rhythm: for theology that takes time and experience seriously

A Reference Guide for Rhythm in Post-Hegelian Philosophy 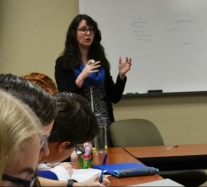 The Rhythmic Theology Project is an ongoing program of research concerning the religious significance of the rhythms through which humans live. As a phenomenon that encompasses poles that are often at odds in theoretical discourse – space and time, pattern and variation, individual and collective – rhythm illuminates the connections between doctrine, practice, and culture in which religion is woven.

The project was first conceived at the University of Oxford in 2012 in the form of a DPhil dissertation in Christian theology. Drawing on the arts and social sciences, Lexi Eikelboom developed a framework for the theological analysis and evaluation of various theologians’ and philosophers’ use of rhythm.

Once defended, the project then developed into a book with Oxford University Press, titled Rhythm: A Theological Category, which lays the groundwork for thinking about rhythm theologically, that is, as pertaining to doctrines of metaphysics, creation, salvation, analogy, the church etc.

Rhythm and Ethics class at the Rhythm! Discovery Center in Indianapolis.

These developments took place over the course of the three years that Lexi spent as the Postdoctoral Teaching Fellow at the John Wesley Honors College. In that time, the project expanded to include courses in which undergraduate students were invited to participate in Lexi’s research on rhythm. Out of these courses, Lexi developed a proposal for a second phase of the project, which uses rhythm to better understand the relationship between church and world.

This phase of the project is currently underway at the Australian Catholic University’s Institute for Religion and Critical Inquiry. Lexi is there seeking to understand the rhythms that form contemporary industrial societies, the rhythms of the churches that attempt to flourish in such societies, and the relationships between them. Thus, while the relationship between church and sate is typically cast as a confrontation between ideologies, The Rhythmic Theology Project reframes the relationship in terms of intersecting rhythms, thereby uncovering the social forces that account for particular sorts of religious experiences in our contemporary world.